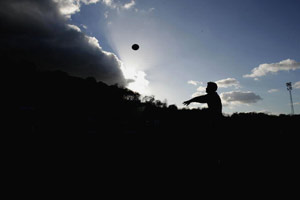 With just two rounds of the European Challenge Cup to go

Sale Sharks will have to beat “probably the most dangerous team in Europe” if they are to qualify for the semi-finals on the weekend of 22 / 23 April and add the City of Manchester Stadium to the 75 other venues across Europe to have staged Heineken Cup action.

The Sharks are venturing into uncharted waters as the only newcomers to the last eight and coach Kingsley Jones, the former Wales captain, is happy to claim the status of underdogs for a quarter-final that carries “home” advantage in the semi-finals for the winner, either back at the quarter-final venue of Estadio Anoeta in San Sebastian or the City of Manchester Stadium.

“Biarritz will be favourites in virtually everyone’s eyes and that suits us just fine,” said Jones. “We have been frequently tagged as the favourites in other matches this season but, on this particular occasion, as far as we will be concerned it will be a case of everything to gain and nothing to lose.

“You only look at the sides who are not in the quarter-finals – teams like Wasps and Stade Français Paris – and that speaks volumes of how far we have come.

“And I am delighted the match is being played in San Sebastian. Although Biarritz did play there last year against Munster in the quarters, this will be only the second time for them and that makes it much more of a neutral venue. It is a fantastic opportunity to be playing there and the boys are confident they can go there and cause a surprise.”

This is the fourth straight tournament that Biarritz have made the knock-out stages and Jones accepts the Sharks’ lack of experience on the elite Heineken Cup stage could be a drawback.

“Quite a few of the boys have international experience but we haven’t got a great deal of Heineken Cup experience – and that showed in the away game against Munster in Round 6,” said Jones. “They simply had to win to qualify for the quarter-finals while we had already qualified and they showed us up in a big way.

“We were certainly not planning on losing the match – and with it potential home advantage in the quarter-finals – but hopefully the experiences of Thomond Park will stand us in good stead in San Sebastian and, if we can win, then we will be home in the semi-finals and playing at the superb City of Manchester Stadium.

“That said, we know they have some great players. Their back row as a unit is outstanding, and, although it would have been nice to have had Sebastien Chabal available, we have plenty of talent in that area as well with the likes of Jason White, Magnus Lund, Chris Jones and Nathan Bonner-Evans.

“I don’t think that France having won the 6 Nations will make the Biarritz international players any more dangerous and it will be interesting to see how they cope with a return to club duties.

“In Damien Traille, Dimitri Yachvili and Thomas Lievremont in particular they have players in the key positions to influence a game but on the plus side for us having had Jason (Robinson) available after his retirement from Test rugby has been fantastic in things like helping motivate the players and setting high standards.

“Philippe Saint-Andre, our Director of Rugby, is certainly looking forward to taking on Biarritz and rates them as probably the most dangerous team in Europe. It is up to us to take the game to them and go for it.”