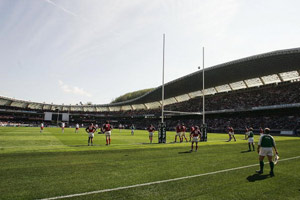 But skipper Thomas Lievremont knows that a second successive home quarter-final tie at Estadio Anoeta is far from a done deal with Saracens set to travel for a massive winner-takes-all last round clash in Pool 4.

“We didn’t pick up any points in our game at Saracens and they beat us well. We are really looking forward to the return and our goal is to secure another home quarter-final,” said international back rower Lievremont.

“We certainly have revenge on our minds after the 22-10 defeat at Vicarage Road and we would all love to play another game in San Sebastien. We know that Saracens are a strong side and we know we will have to beat them to go through – it’s going to be a massive game.”

Only one team has ever beaten Biarritz on their own patch – Bath back in 2001 – and they have won 14 games in a row at home since then.
That was exactly the same situation with Ulster, who finally surrendered their proud unbeaten home run at Ravenhill on Friday night when Biarritz ran out 24-8 winners.

“We knew that not many French teams had ever won at Ravenhill. We had been beaten three seasons earlier and so it was a very important game for us to win,” said Lievremont.

“It was a good away performance and we were very proud to win. But now we have to carry on winning to reach the quarter-finals.

“Last year we slipped up in the semi-final against Stade Francais right at the end. It is always very difficult when you are playing another French team in the Heineken Cup because we know each other so well.

“It is different when we play British, Irish or Italian teams – it is easier to get things right in your head.

“This season is harder than the last in this tournament and we know it will get even harder if we reach the quarter-finals. The Heineken Cup is very important to us and we know we can make up for last year.”

Biarritz coach Patrice Lagisquet claimed the main reason his side were able to dominate proceedings at Ravenhill was that they travelled “without any fear”.

“We are a more mature side this season and we never feared the pressure of having to come to Ravenhill,” he said.

“Even if the first half (8-5 to Biarritz) wasn’t completely controlled, it was effective. We were well organised on the defensive line and we were never in any real danger.

“There is a growing confidence and maturity about this Biarritz side but, even though we haven’t lost since we were beaten in the first round by the Saracens, we know the return game is going to be very difficult.

“Saracens are a real danger and a very strong side. It is going to be a very important game for us this weekend.”