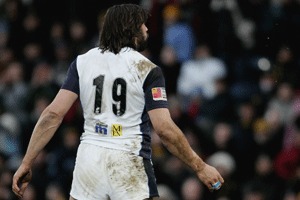 Sale’s back row Sebastien Chabal has been banned for five weeks for stamping on former England captain Lawrence Dallaglio.

Chabal was cited after being sent off in Sale’s loss to Wasps at the weekend and was suspended following a Rugby Football Union disciplinary hearing in Brighouse on Monday.

Chabal was found guilty after a three-man panel backed up the decision of referee Roy Maybank to red-card the former French international.

The panel of chairman John Spencer, Antony Davies and Dr Barry O’Driscoll imposed a two-week penalty for the stamping offence and three weeks for spitting.


Chabal will not be free to play again until 4 April, meaning Sharks coach Philippe Saint-Andre must plan without the influential number eight for the forthcoming Heineken Cup quarter-final which kicks off at 6pm, on Sunday 2 April, in Estadio Anoeta, San Sebastien.