Saints determined to march on 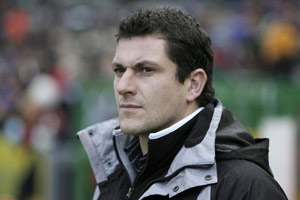 Northampton coach Paul Grayson admits his side will have to raise their game two or three notches to make it a contest against London Wasps in the Heineken Cup semi-final at Coventry's Ricoh Stadium on Sunday. - 19/04/2007 12:06

Northampton Saints coach Paul Grayson goes into the all-England European Challenge Cup quarter-final against Worcester Warriors at Franklin’s Gardens on Saturday with 13,500 reasons to see the Saints go marching on into the last four.

The Saints, the Heineken Cup winners in 2000, have seen off Italian, French and English opposition on the way to the quarter-finals and Grayson now wants to reward the club’s loyal fans with some silverware.

“The fact that we are playing another English club is not important – it doesn’t come into the equation,” said the former England fly half.

“The big and important things are that we are at home and we are in the quarter-finals. Those are the things that really matter.

“This will be the fourth time we have met Worcester this season as we have already played them twice in the Premiership and once in the Powergen Cup.

“And, strange as it might seem, results have gone with the away team. We have twice beaten them away but lost at home to them so we currently stand 2-1 up.

“If we can win the European Challenge Cup that would be fantastic – and qualifying for next season’s Heineken Cup as a result would be the cherry on top of the cake.

“We have had a massive injury list this season but, if we ignore those who are out for the rest of the season, then we are not doing too badly right now.

“The tournament has been a great change from the league and the back-to-back matches against Narbonne provided a good learning curve for the side. We gained confidence from those matches and the European Challenge Cup has been a very positive experience.”