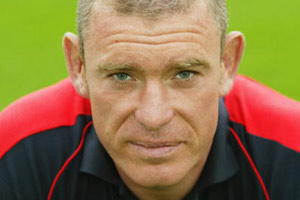 
It means that 19-year-old Jack Forster retains his place in the front row in place of Gary Powell because of a shoulder injury, although Gloucester will give Powell until the last minute to see if he is able to make the bench.

Gloucester claimed the points in a 27-16 win last weekend and Ryan was also able to name full-back Olly Morgan in the starting line-up despite the fact the England Under-21 star limped off last Saturday with a recurrence of an ankle injury.

Adam Eustace will start his second successive game at lock alongside Alex Brown, while Peter Buxton will skipper the side in a back row trio that will also contain Andy Hazell and James Forrester.

Patrice Collazo and Mefin Davies will complete the front row alongside Forster.

The backline is also unchanged which will provide another opportunity for the talents of Anthony Allen and Ryan Lamb to sparkle alongside James Simpson-Daniel, Mike Tindall, Peter Richards and Mark Foster – who scored twice last weekend.

“I think last weekend was a big confidence boost for everyone,” Ryan told www.gloucesterrugby.co.uk. “The group of players we have worked post the Six Nations has found a bit of consistency and it was important to finally get a performance and a result off the back of that consistency.

“It simply reinforces what we are trying to achieve in the long-term but I am sure we will be under a good deal of scrutiny again this weekend against a very competitive side.

“We had problems in the scrummage last Saturday at times and those problems mean guys like James Forrester and Peter Richards have to problem solve in a different way which is great for their development.

“But I am sure this weekend will be a totally different challenge between Worcester’s great set-piece work and our movement and pace.

“I am sure it will be a tremendous occasion and a great atmosphere and we have to try and reproduce the good things we did last weekend.

Click here to head to the ERC match centre