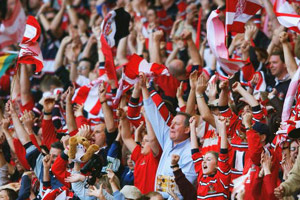 Gloucester coach Dean Ryan is banking on his club’s fanatical supporters filling the Twickenham Stoop ground to its 12,500 capacity…

For long periods it looked as though Worcester Warriors might be capable of causing an upset at Kingsholm in a tense semi-final, but Ryan’s team came through in the end.

“It was a tense win in the end. When we were 15-3 up I thought we could go on and win well. But Worcester were very competitive up front and very sharp mentally,” said Ryan.

“We were struggling to get into the game for a 20-30 minute period in the middle of the game. But we kept our ambition and we kept on playing

“In the end, I think we got what we deserved because the players kept on believing in themselves. This team needs to go through this tournament to achieve what I believe we can one day achieve in the Heineken Cup.