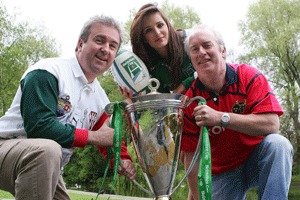 RTE radio and ercruggby.com will be carrying live commentary of the Irish provinces in action in Europe this weekend. - 05/12/2007 11:44

This will be Michael Corcoran’s 99th commentary on a Heineken Cup game and he is looking forward to the match:


“With only 11 days to go until the final, the excitement is really building up for the match.  RTE Radio will have a team of rugby experts over at the Millennium Stadium in Cardiff to capture all of the action and the atmosphere.”

Former Irish Captain and Coach Ciaran Fitzgerald will also provide commentary and presenter John Kenny will be joined by former Irish Internationals Donal Lenihan and Victor Costelloe with analysis and expert views of the game on all wavelengths from 2.01pm on RTE Radio 1.

Irish rugby fans worldwide will be able to listen to Michael Corcoran’s commentary live from the Millennium Stadium Cardiff on Saturday 20th May on RTE Radio 1 on FM, MW and LW 252.  RTE Radio’s coverage will also be live streamed on www.ERCrugby.com .

Listen to live coverage of the Heineken Cup final on RTE Radio 1, all wavelengths, from 2.01pm on 20 May