Registration of players for Heineken Cup 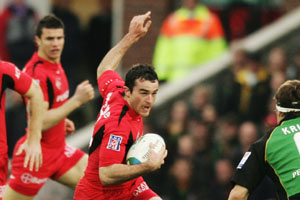 As the Heineken Cup quarter-finals approach

As the Heineken Cup quarter-finals approach, the remaining eight clubs have taken the opportunity to strengthen their squads for the knock-out stages.

Players of note include Christian Cullen and Benoit Baby, who have both returned to Munster and Toulouse respectively and are expected to play an influential role in the knock-out stages of the tournament.


Back from injury, the former All-Blacks full back, Cullen, will add strength and depth to Munster’s attack. The New Zealand star missed out on playing in last year’s Heineken Cup quarter-final, due to an injury to his left shoulder sustained during a league defeat against Cardiff Blues.

Baby is back training with Toulouse and is well on the road to recovery following a knee operation. The French international hopes to be back on the pitch in April. Toulouse fans have great expectations of the 22 year old in the future and will welcome his return to the pitch.

As per Heineken Cup regulations, each of the quarter-finalists may add up to two players in any position and one further front row player to its tournament squad for the knock-out stages.

The quarter-finalists have nominated the following players for registration: