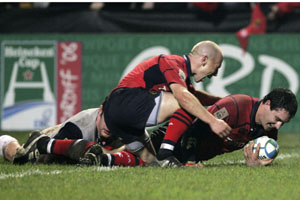 The Munster Branch, IRFU Development Committee confirmed this week, following its consideration of the draft feasibility study conducted by ARUP Consulting Engineers, that Thomond Park has been unanimously nominated as the most favourable venue for the provision of a 26,000 capacity rugby stadium.


A number of potential sites had been considered in the Limerick area.

It is proposed that full details of the new project will be announced at a Media Conference in Thomond Park, when outline drawings of the new stadium are available.

The Development Committee wishes to express its gratitude to the residents of Knockalisheen Road, without whose co-operation the preference to retain Thomond Park as the preferred venue for the redevelopment programme might have been jeopardised.

The Development Committee further acknowledges the indication by Limerick City Council of their support for the project.