Quarter-finalists check out their competition 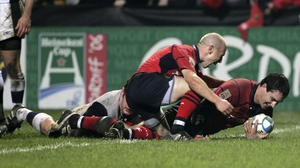 Munster Rugby have confirmed that Ticketmaster will begin sale of Munster v Perpignan Heineken Cup quarter-final tickets at 9.30am on Monday 6 March. - 29/11/2006 12:48


The clash will be an opportunity for Perpignan coach, Philippe Boher to preview the array of Munster talent on the Ireland team. Perpignan’s sole representative, David Marty, will face a total of seven Munster players. Marcus Horan was forced to pull out at the last minute due illness.

Toulouse’s Guy Noves and Leinster’s Michael Cheika’s may also focus their attention on this match as six Toulouse stars will go head-to-head with four of Leinster players.

Les Blues have a point to prove, having suffered an unexpected defeat against Scotland last weekend. Bernard Laporte has made five changes to the side for Saturday’s game with Ireland, in an attempt to resurrect the French form that was evident in the Autumn Internationals and the Heineken Cup.

The quarter-finals will be played on April 1, with Leinster travelling away to Toulouse’s Le Stadium, and Munster taking on Perpignan in Lansdowne Road.