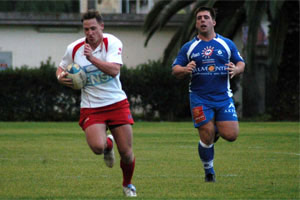 Pool Matches
Four points for a win, two points for a draw (match points). A bonus point will be earned by a team scoring four or more tries and by a team losing by seven or less points. The five Pool winners and three best placed runners-up will qualify for the Quarter-Finals and will be decided by the following criteria:
The Pool winner will be the Club with the highest number of match points earned in each Pool. The runners-up will be the three second placed Clubs from all five Pools with the next highest number of points. For the Quarter-Final round, the Pool winners will be ranked 1 – 5 in terms of the number of points earned. The runners-up will be ranked 6, 7 and 8.

Clubs from different Pools
If still unresolved, or the teams have not played each other previously in the Pool stage, qualification/ranking will be based on:
(a) the number of tries scored in all Pool matches.
(b) aggregate points difference from all Pool matches.
(c) the Club with the fewest number of players sent off and / or suspended in all Pool matches.
(d) toss of a coin.
Teams ranked 1 – 4 will have home advantage. The Quarter-Finals will be:
Team 1 v Team 8 (Match A) Team 2 v Team 7 (Match B)
Team 3 v Team 6 (Match C) Team 4 v Team 5 (Match D)

and once the final eight are decided