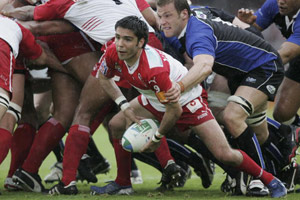 Having missed out to French rivals Toulouse and Stade Francais Paris in the last two semi-finals, Yachvili and co thrilled the packed Basque crowd at Estadio Anoeta in San Sebastian with a power packed display that guaranteed them a place in their first Heineken Cup final in Cardiff at the Millennium Stadium on Saturday, 20 May.

“We are very proud to reach the final because it is a first for us – and because we missed out in the last two semi-finals,” said Yachvili. “All our fans are proud of our achievement and we will now do everything we can to bring the Heineken Cup back to Biarritz and the Basque country.”

Having beaten two of England’s top sides in the knock-out stages, Sale Sharks and Bath, Yachvili says he doesn’t mind which one of the two Irish sides Biarritz meet at the Millennium Stadium.

“They are both Irish teams and both are very strong. I don’t mind which one we meet,” Yachvili said.

“We felt in control of the game, but less so than we did in the quarter-final against Sale.  We knew Bath would be strong up front and they didn’t disappoint us.

We just played the match we had to play to win and we will do the same whoever we meet in the final. If we have to play like we did against Bath to win, then that’s what we will do.”