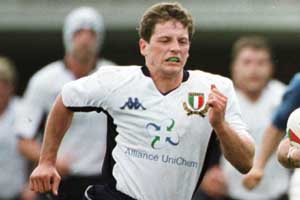 Italian international centre Walter Pozzebon is the latest addition to the Bristol Rugby squad, signing a two year deal as Richard Hill continues his preparations for the 2006-7 season.

Pozzebon, who has just turned 27, has won 21 caps for Italy and joins from Benetton Treviso.

He also possesses a wealth of European experience with four Heineken Cup and two European Challenge cup campaigns with Treviso under his belt and will add some international quality to the squad as the Head Coach explained to the official club website:

“He’s an exciting international centre who will bring some quality to the squad. He’s actually been studying for a degree over the past two seasons which is why he hasn’t featured so much but he’s back to rugby full time now.”

“Walter can actually play a number of positions. I spoke to both John Kirwan and Pierre Berbizier and they had nothing but good things to say about him and said what a talented player he is.”

“He’s probably best at 13 but he’s quick enough to play on the wing and Berbizier said that he’s a talented playmaker who they’re actually considering at 10.”

“He’s a talented footballer with a good mentality. He speaks good English. He’s already been over and met the boys. He’ll fit in well and is definitely one for the future.”