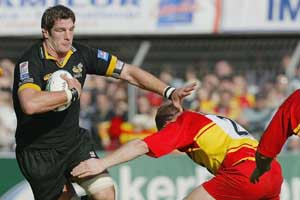 The results of an ERCrugby.com fans poll predicts that 2004 champions London Wasps (45%) and 2006 quarter-finalists Perpignan (42%) will be the main contenders to top Pool 1.

The Heineken Cup Pool draw served up a double helping of French clubs in Pool 1. Castres Olympique and last season’s quarter-finalists Perpignan are the only French teams that will meet in the Pool stages of the 2006/07 Heineken Cup, which kicks off on the weekend of the 19/20/21 October.

The 23rd Heineken Cup team came from France this year because French side Biarritz progressed further than any other English or Italian side last season. Castres benefited from this rule and qualified as the seventh French team in the 2006/07 Heineken Cup tournament.

Castres and Perpignan are joined in Pool 1 by previous champions London Wasps, who won the Heineken Cup final in the Twickenham Stadium in 2004 in memorable fashion with a last minute try against Toulouse. English rugby fans will hope that it is a good omen for Wasps that the 12th Heineken Cup final is set to return to the home of England rugby next May.

Top Italian seed Benetton Treviso as Super 10 champions are the fourth team in Pool 1. This will the Italian’s champions tenth year participating in the Heineken Cup tournament.

Expectation for the return of the Heineken Cup final to Twickenham is already building with close to 10,000 tickets already sold for the showpiece match.