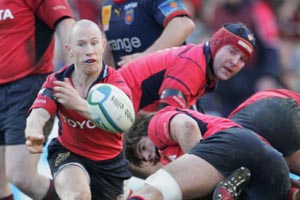 Leinster’s fly-hlaf Felipe Contepomi and the Munster duo of Denis Leamy and Paul O’Connell (Munster) have been nominated for tthe BT IRUPA (The Irish Rugby Union Players Association)  Players’ Player of the Year.

The awards – which carry significant prestige – are the only awards voted for by the players themselves and votes have come in from players in all of Ireland’s four provinces.


Amongst the favourites to land the BT IRUPA Players’ Player of the Year are Munster duo Paul O’Connell & Denis Leamy and the talismatic Argentinean Felipe Contepomi.

Mark McHugh, Chairman of IRUPA said, “Winning an award voted for by those who you play and compete against is the best tribute for any rugby player. This awards ceremony will celebrate those players who dominated the season but will also raise much needed funds for the IRUPA Injured Players Fund.”

This year there is a feast of talented players up for the IRUPA Green Giant Newcomer of the Year Award. Never before has there been such a line up for this award with Ulster’s Andrew Trimble favourite to land the award but he faces stiff competition from Munster livewire Barry Murphy and Leinster’s Rob Kearney.

Mike Maloney, COO, BT Ireland said, “It has been an amazing year for all who follow and support Irish Rugby with the exploits of the provinces in the European and Celtic competitions and the Triple Crown heroes of Twickenham. BT Ireland is delighted to sponsor an event that recognises such outstanding achievement and we congratulate all the players who have been nominated.”

The winners will be named on Wednesday 3rd May.