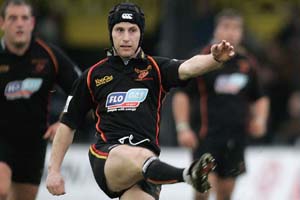 There will be three Italian sides in the Heineken cup for the first time in the tournament’s history next season after Rugby Parma pulled off a sensational victory at Rodney Parade.

There will be three Italian sides in the Heineken cup for the first time in the tournament’s history next season after Rugby Parma pulled off a sensational victory at Rodney Parade.

The Italians, who finished third in their domestic championship, had to battle back from a 15-13 interval deficit before coming out on top.

The Dragons used their driving lineout to good effect to overcome a fifth minute Mazzariol penalty that opened the scoring and loose head prop Adam Black came up with two vital tries.

The second of those scores came when the visitors were down to 14 men, with tight head prop Fabio Staibano in the sin bin, but Rugby Parma hit back almost immediately with a 60 metre dash from back row man Liviu Pascu for a try at the posts with Mazzariol converted.

The outside half then gave his side the lead with his second penalty before a brilliant burst by Nathan Brew paved the way for Gareth Chapman to ease the Dragons ahead 15-13 on the stroke half time.

The Rugby Parma pack stood up to the home eight in all phases and the tigerish defense of the visitors caused increasing frustration for the home fans.

Mazzariol missed with two penalty attempts to regain the lead before hitting the mark again after 50 minutes to put his side ahead once again.

It was a lead they were never to relinquish despite constant pressure for the Dragons.

Video ref Geoff Warren ruled out a Black hat-trick after another close range charge from the home pack and the only scoring from there on in came from the visitors.

Center Ezio Galon hammered home a 35m drop goal and that Emerrick try at the death rounded off a famous night for Italian Rugby.