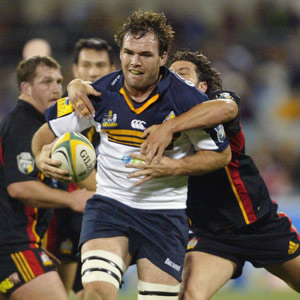 Leinster Rugby announced that Wallaby Owen Finegan has agreed to join the province from the Newcastle Falcons on a one-year deal. - 29/11/2006 12:04

Leinster Rugby announced that Wallaby Owen Finegan has agreed to join the province from the Newcastle Falcons on a one-year deal.

“Owen’s experience and knowledge of the game, coupled with his no-nonsense approach to rugby will be a huge benefit to this Leinster side in its ambitions for 2006/07”, said Leinster coach Michael Cheika.

“His leadership influence on a strong group of young back rows and locks, already at the club, will also add invaluably to Leinster’s future.”

Australian born Finegan joined the Falcons in the summer of 2005, and boasts considerable experience at both Test and Super 12 level.

Owen made 19 appearances for Newcastle in the 2005/’06 season, scoring three tries. He will join compatriot Chris Whitaker, Stephen Keogh and Trevor Hogan in committing to the province for his first Heineken Cup season.