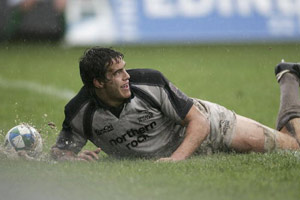 Newcastle Falcons flanker Mike McCarthy has insisted his side can put Sunday’s horrow show behind them, as they prepare for Friday’s visit of Irish province Connacht to Kingston Park in the European Challenge Cup quarter final (kick-off 7.30pm).


The 24-year-old is well placed to run the rule over Connacht after spending a season with the Galway-based outfit two years ago, but on the back of Sunday’s 32-13 defeat to Northampton Saints, the Falcons are looking closer to home in their own preparation.

“Friday is now a huge game for us, and we’re desperate to win this competition so we can take something out of this season,” said McCarthy, who has scored six tries in his 51 appearances for the club.

“After Sunday’s performance against Northampton we owe our home fans a lot.

“Not much was said after the game, and it was a very quiet dressing room. We all knew we’d let the supporters down with the way the team played, and the good thing is we now have a chance so soon after the game to try and put it right.”

The Falcons have won all six of their European games this season, beating Brive, Borders and L’Aquila home and away and scoring 44 tries in the process.

A home semi-final against London Irish or Bayonne awaits, but despite being up against a Connacht side rooted to the bottom of the Celtic League table table McCarthy believes Friday’s opponents must not be underestimated, as their 11-9 victory at Border Reivers last weekend demonstrated.

“I really enjoyed my year at Connacht, and they’re a good bunch of lads with a close-knit squad,” said the former England Under-21s back rower.

“The season I was there we got to the semi-finals of the European Shield, just losing out narrowly to Harlequins on aggregate, and we also took some good scalps in the Celtic League as well.

“I know most of the squad there, and they’re a real hard-working side. They’re very fit, they work for one another really well and they’re coming over here expecting to win. It’s the focal point of their whole season, and they’ll be up for it.”

Assessing the dangers in the Irish side, McCarthy said: “They have some very good players such as the young hooker John Fogarty, Ray Hogan at prop, their captain Andrew Farley and then Colm Rigney who used to play for Leeds.

“In the backs they’re also not a bad side, and they have runners like Matt Mostyn, Mark McHugh and Darren Yapp who can all cause problems and score points.

“They’re quite a forward-oriented team, and they like their driving play which they use a lot.

“They will be keen to try and take us on up front, but then they have the capability to spin the ball wide as well, so it will be a tough game.”

With the Falcons keen to redress the balance following Sunday’s disappointment, McCarthy said of the preparation: “It’s a short week I terms of training so I don’t know if we will be getting beasted, but there is clearly a lot of work to be done before Friday because we were shocking against Northampton.

“We had been going well in the forwards over the last few months, now we just have to refocus.

“We’re determined to put right what happened on Sunday, and we’re confident in our ability to work hard and get the result we need.”

Tickets for Friday’s game are still on sale for all areas of the stadium by calling 0871 226 60 60, logging on to the Falcons website or popping to Kingston Park during office hours.