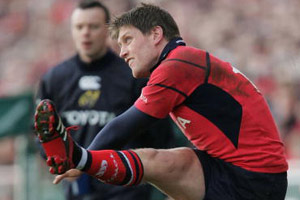 Munster’s Ronan O’Gara, a veteran of two Heineken Cup finals has the height of respect for Munster’s opponents next Saturday…

O’Gara has faced many of the Biarritz side during Ireland’s RBS Six Nations clash earlier in the season, and knows exactly how big a challenge it will be on Saturday.

“I think they are a hell of a side. They have quality players from one to twenty two and obviously my most recent memory of some of those would be from the international earlier in the season.”

And O’Gara says he expects the match against Biarritz to be electric, despite criticisms of Biarritz’s style of rugby.

“I don’t buy into this notion that they are a dour side because of the way they played in the quarter final or semi against Bath.

“Those games are about winning, getting to the next stage and Biarritz saw off two good sides with the minimum of fuss.

“They showed in those games they can mix it with the best and then they have the players such as Damien Traille Nicoloas Brusque and Philippe Bidabe who are very good ball carriers, good runners.

“They were certainly very impressive the other night against Montpelier so we know we will have our work cut out for us but I think its going to be a great occasion and I’m really looking forward to it.”