O’Driscoll can give Munster an edge 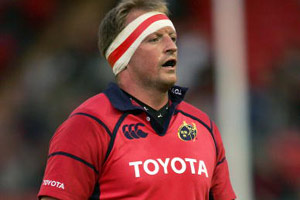 Munster will not be short of inside information when they take on Perpignan in front of a Lansdowne Road full house of 48,500 fans…

Lock Mick O’Driscoll is back where it all began for him after spending the last two seasons in southern France with the club standing in the way of the Irish province reaching a remarkable sixth semi-final in the last seven tournaments.

“From the moment I heard we were playing Perpignan I have been really looking for to the game and when I met Bernard Goutta earlier in the season he said he hoped we would meet in the final so I guess the clash we both wanted has come a few rounds early,” said international lock O’Driscoll.

“I brought back some line-out and scrummaging ideas that might make a little bit of difference at Munster but the fact that Perpignan didn’t have many players involved in the 6 Nations will certainly have helped them while at Munster we will hardly have played together as a team before we go into the quarter-final.

“And you never know what to expect from the French. When you travel away with them you often get the impression the mood is slightly different to a home game.

“I guess it means that in the first 10 or 15 minutes of a game they can either go mad and score tries at will, or some guys can just run out of the gate and disappear. It is something you cannot put your finger on.

“It is not something that seems to affect sides like Toulouse, Stade or Biarritz so much, and Perpignan have proved they can win away from home when it matters with their win over Leinster at Lansdowne Road in the 2003 semi-finals

“It was the same this season in Cardiff, although they got turned over in slightly controversial circumstances at Leeds Tykes.

“And the fact a number of Perpignan players have appeared at Lansdowne Road twice before will help them and they really went for it in both those games.

“I went back to Perpignan around Christmas and met a few of the players – it was great fun. It was a great experience for me to play in France, those two years opened up a whole new chapter in my rugby life.

“When I left school I started with Munster and knew nothing else. It was good for me to experience new and different things. If you move from job to job you learn the ways of the other company and try to get the best of both worlds. Playing in Perpignan has made me both a more rounded person and player.

“On the other hand if you spoke to a lot of the French people in Perpignan you would find many of them have never left the area – they don’t even have passports, they are very home-based people. Even the ones with holiday homes have them sited only 10 kilometres away from the town centre!

“Manny (Edmonds) has been there for five seasons and it takes that long for the French to take on board your point of view.

“When you first arrive you get told this is Perpignan and this is the way you do things but Manny has earned their respect – as has Perry Freshwater – and they are beginning to open up a bit to some of ideas they have brought to the table.”