Noon has Connacht in his sights 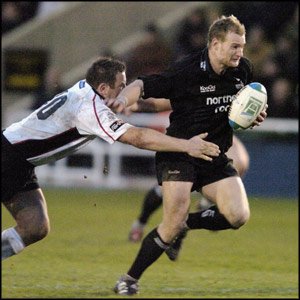 England centre Jamie Noon is back in training and raring to go for Newcastle Falcons on Friday night, as they host Irish province Connacht…

The 26-year-old is in line to make his 144th competitive start for the club, insisting: “I’m back in full training, and Friday can’t come quick enough.”


Noon missed Sunday’s defeat to Northampton Saints after picking up a concussion on England duty, having scored an early try against the Irish at Twickenham.

“I got a bang on the head in the first half against Ireland, and while I can’t remember too much about it, I’m reliably informed that it was our hooker Lee Mears who I collided with,” he said.

“I was touch-and-go for last weekend, and I should pass my Cogsport test later this week to get the all-clear for Friday. I took the test yesterday and passed in all but one of the sections, just failing by a tiny margin, and I’ve been training full-on with the rest of the lads this week without any problems at all.”

Noon’s return will boost the Falcons as they aim to bounce back from Sunday’s 32-13 loss to the Saints, with the Goole-born centre saying: “This game is massive to the club now after a pretty poor Premiership campaign, and there is a huge emphasis on winning this competition to really salvage the season.

“Winning any silverware is always a goal in itself, but the chance to get Heineken Cup rugby is vital for the club and everyone is aware just how much it means.

“This competition has seen some of our best rugby this season, especially winning away at Brive, and it also gives us a chance to repay the supporters for what happened last weekend.”

Having watched on from the stands on Sunday, Noon said: “It was frustrating for everyone, and there were a lot of people pretty down after the match, but we’ve picked ourselves up in training and are putting in a really good week.

“It’s a short turnaround playing Sunday and Friday, but we had a good session in the gym on Monday morning, did a lot of contact stuff in the afternoon and have continued that today with two sessions.

“There has been a big emphasis on contact skills, because we really let ourselves down in that area at the weekend, so Peter Walton has been working hard on rucking and mauling, retaining our own ball in the tackle and hassling the opposition at the breakdown.

“It’s early days and there is still a lot to do this week, but the general mood in the squad is that we’re determined to put Northampton behind us and just get on with the job in hand.”

With Connacht somewhat of an unknown quantity, the Falcons have been running the rule over the Galway-based side after going up to watch them against Borders in Galashiels last weekend, where a good forward effort helped them to an 11-9 victory.

Said Noon: “We don’t know a huge amount about them yet, but the coaches are analysing the tapes and we’ll have a good look at them before Friday.

“We played them in pre-season two years ago, and what we do know is that they’re a very hard-working team. They’ve reached the semi-finals a couple of times recently, so it will be a hard game and we’ll need our home support to really get behind us on the night.”

Tickets for the game are available by calling 0871 226 60 60, logging on to the club website or popping to Kingston Park during office hours.