No Letting Up Against Scarlets – Bru 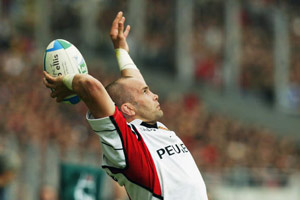 “Although we have now qualified for the quarter-finals, we are still going all out for the game against Llanelli,” said the international hooker.

“Getting a home quarter-final is a massive advantage for possibly advancing to the semis, particularly for the French. We saw that last year with all the French quarter-finalists getting through at home matches.

“It’s also very important for us to get the home tie for the club and for our supporters. The fans were amazing in our match against Wasps. There were over 30,000 Toulousains in the 34,000 crowd and that makes for a great atmosphere.

“I know that no team that has gone through the Pool stages unbeaten has gone on to the final but we will have to put superstition aside as the home advantage is worth far more than that to us. Also, as we only drew away to Wasps, maybe we will escape the jinx!

“The game against Llanelli is going to be massive. We know from our earlier Pool game against them that they can be a very physical team and we also saw the way they imposed their game on Wasps at Stradey Park earlier in the season so we are not going to underestimate them. We know that Llanelli have a lot of strength in their squad so we are preparing for a big task.

“We have taken some very positive points from the game against Wasps which we’ll take forward to Llanelli. Our defence was very strong and we kept our heads. We didn’t let anything go and that’s what we want to take to Wales with us.

“Our game against Wasps was a fantastic performance by both teams and we plan to take the same performance to Llanelli. I know we’re the current holders of the cup, but it’s always good to remind everyone what we are capable of and that we are good enough to hold onto the title.”