New skipper at the Dragons Helm 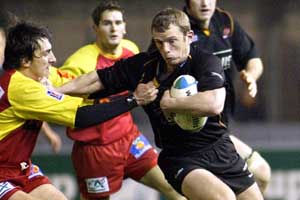 Kevin Morgan takes over the leadership reins from the departed Jason FOrster at Newport Gwent Dragons.

Speaking on the appointment of Kevin as captain, Dragons Head Coach Paul Turner said, “I believe Kevin is a natural successor as captain to the Region and there is no doubt in my mind that he will do a great job. He has a hard act to follow on the back of last season’s captain Jason Forster who I would again like to thank for his efforts as captain. Kevin is a motivator of men, an excellent communicator and on field inspires those around him. He has the respect of all the players, leads by example and has the best interests of the team at heart, there is no doubt he will prove to be an inspirational and tremendous captain.


The Welsh International fullback who has 36 caps to his name joined The Dragons in the summer of 2004 joining from the Celtic Warriors. In his time with the Region he has played 34 times and scored 15 tries. In the 2004/05 season he finished top try scorer of the Celtic League, although last season came to an abrupt end for Kevin with a serious foot injury at Christmas.

Morgan has accumulated 40 Heineken Cup caps and scored 11 tries in the Europe’s premier rugby tournament. The 29 year old has played in the previous 10 Heineken Cup seasons.

“I am very proud to be made captain of The Dragons,” commented Morgan.  “Last season is now behind us and the whole team is looking forward to the challenges ahead. There are a number of new faces who will make an impact. The support we had last season was tremendous and with the backing of our supporters I can assure fans that on-field we will be doing everything we can to repay their support.”