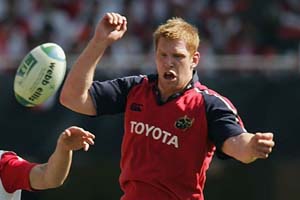 Munster skipper Paul O'Connell is definitely out of Friday night's Heineken Cup quarter-final shoot-out with the Scarlets at Stradey Park. - 26/03/2007 17:36

Positive news for Munster, as Paul O’Connell passed a fitness test and will take his place in the second row against Scotland in Lansdowne Road.

The Munster lock, an inspirational figure for the Irish and for Munster throughout their Heineken Cup campaign, suffered an AC joint separation against France nearly four weeks ago and missed the 31-5 demolition of Wales.

He was withdrawn early from training on Tuesday as a precautionary measure and was given the all clear by Ireland’s medical team on Thursday.

Donncha O’Callaghan has paid the price for his Munster team-mate’s return and must settle for a place on the bench for the clash with Frank Hadden’s side.