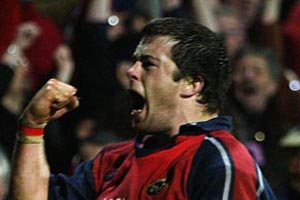 The Munster side in action against the Dragons will include 11 of the starting line-up from last Saturday's Heineken Cup success over Perpignan. - 29/11/2006 12:38

The Munster side in action against the Dragons will include 11 of the starting line-up from last Saturday’s Heineken Cup success over Perpignan.

Staying behind when the squad fly out from Shannon are Ronan O’Gara and Denis Leamy who picked up injuries in that game against Perpignan and Marcus Horan who suffered a calf injury in training on Tuesday.


In addition to that trio from the starting XV last weekend, Christian Cullen twinged a hamstring in training while Denis Fogarty sustained a hand injury ruling both of them out of the Dragons match.

Fogarty and Cullen are likely to be available for the Edinburgh game but Horan will not, management hoping to have the prop back in time for the Heineken Cup semi-final clash with Leinster.