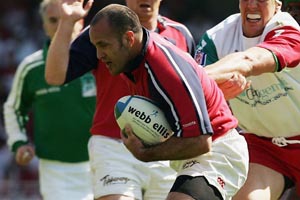 Marking the return of injured duo

Marking the return of injured duo, Mullins in the centre and the ex All Black star in the backs, the Munster men easily defeated Borders Reviers in Scotland by 41-25 ( 5 tries to 3).

En route to victory Munster picked up fresh injuries ahead of the Heineken Cup final in three weeks. As it stands Munster have five new players needing treatment, and it will be later in the week before the impact is clear.


Prop Frankie Roche is almost certainly out of contention for the Biarritz match after tearing his calf. Roche was replaced after only four minutes by John Hayes who then suffered a knee injury. Munster finished the game with uncontested scrums, and hooker Jerry Flannery also picked up a hamstring strain.

Behind the scrum Mike Mullins’s comeback suffered another setback when he had to be replaced after straining his groin, the same injury as now afflicts wing Ian Dowling.

And for the second time in as many games outhalf Jeremy Manning had to be replaced. He got a bang on the head, though manager Jerry Holland maintains he will be fit to start against the Ospreys on Friday if needed.

The only good news was that Christian Cullen came through his stint unscathed, and looked eager for action. Munster have two away league fixtures ahead of the European final, and then they complete their Celtic League programme against Cardiff on May 27.