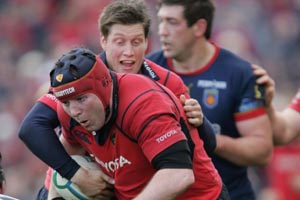 Triple Heineken Cup finalist Anthony Foley scored a try in his final league appearence for Munster last weekend but could not prevent h is side from losing to Glasgow - 09/05/2008 10:35

Munster have annnounced their team for the Heineken Cup semi-final against provincial rivals Leinster kicking off at 3pm.

Ronan O’Gara and Denis Leamy have won their battle to be fit for the Heineken Cup semi-final against Leinster at Lansdowne Road on Sunday while Federico Pucciariello retains the loose head prop position ahead of Marcus Horan whose calf injury did not clear up in time.

The Heineken Cup semi-finals will be broadcast live in the following areas:

ERCrugby.com will be offering Live Match Tracking and Live Audio Broadcast for those who cannot get to a TV. More information about the MatchdayLive platform is available in the broadcast section.