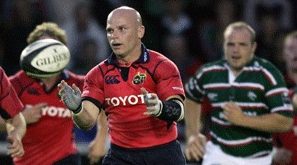 Paul Burke, who still holds the record for the most points scored in an EPCR Challenge Cup final

Burke is to bid farewell to eight-time Heineken Cup quarter-finalists Munster, as the out-half announced his planned departure to Leicester Tigers in time for the start of next season.


No stranger to playing against Tigers, Burke has tallied 106 points against Leicester in a dozen appearances for London Irish, Bristol and Harlequins. Whilst playing for ‘Quins he appeared in two European finals, the European Shield in 2001 and then winning the European Challenge Cup again three years later with victory over Montferrand.

The Irishman will see plenty of familiar faces when he reports for pre-season training in Leicester. He knows Geordan Murphy, Shane Jennings and Leo Cullen from the Irish set up and played alongside Tigers captain Martin Corry at Bristol and Scott Bemand at Harlequins.

“I am lucky enough to have signed a two-year deal with a very good club and, I suppose, when the contract is up I will be 34, and having to think about other things”, he said.

The thirty-two year old will aim to build on his tally of 352 points in 32 appearances in the Heineken Cup and the European Challenge Cup. Both his current and future team-mates are in preparation for their forthcoming Heineken Cup quarter-finals, with both Munster and Leicester on home ground against Perpignan and Bath respectively.

Another pulsating Munster V Leicester final, in the Millennium Stadium in Cardiff on 20 May, would be an apt finale to Burke’s career with Munster.