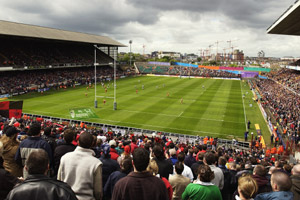 Munster have officially confirmed that their home quarter-final tie will be played in Lansdowne Road. This much anticipated match kicks-off at 17:30, on Saturday, 1 April.


By hosting this quarter-final in Lansdowne Road, the oldest international rugby stadium in the world, an additional 35,000 + tickets will be made available to fans. Both former finalists are hungry for their first Heineken Cup title, a goal that drives players to perform at their highest levels in the knock-out stages of this tournement.

The Munster supporters will be in full voice in Lansdowne Road. However, many will remember their last Heineken Cup clash in Lansdowne when they lost to London Wasps in the 2004 semi-final. Stuart Barnes described it as “the greatest Heineken Cup match I have been privileged to see.”

This feeling was emulated by Mick Cleary of The Daily Telegraph:

“The image of rugby at its finest, with all its thunder and all its grace, indelibly etched. Never a beat missed, never a breath drawn. It was without doubt the greatest match of club rugby, possibly any level of rugby, many of us have witnessed.”

The colourful Catalans will have memories of mixed fortunes in Lansdowne Road. The home of Irish rugby did not intimidate Perpignan in 2003, when the emerged victorious against Leinster in the semi-final. However, they were beaten in the final against the mighty Toulouse, which was also held in Lansdowne that year.

With a record of two wins each from their four previous clashes in the Heineken Cup, Munster and Perpignan will fight to the end for a place in the semi-final.