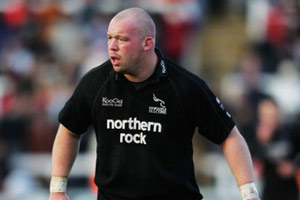 Newcastle Falcons prop Robbie Morris believes his side can progress to the final of the European Challenge Cup... - 29/11/2006 12:18


The 24-year-old has scored three tries in the Falcons’ surge to the semi-finals, and as he prepares to square up against the Exiles the former Northampton man said: “We’ve done well to get the home advantage against a team as good as London Irish, and we need to make sure we capitalise on that.

“It’s a massive game for the club because it’s an opportunity to go to a European final, and Heineken Cup rugby is at stake. From a squad point of view that’s the competition that everyone wants to play in, and from the club’s position the financial benefits are obviously a major attraction as well.”

Going in to the game on the back of Sunday’s victory over the Sharks, Morris said: “Sunday was one of our better performances, especially the second half, and having done the hard work in the forwards we finally ground them down and got the ball wide to the backs who did a lot of the damage. It was good to play a bit of rugby and score some tries.

“We know we can beat anyone, it’s just a question of sorting ourselves out and making sure we do it consistently. We’ve had some good wins and them come back with pretty pathetic performances the week after. You can see it annoys the fans and it’s the same for the players, I assure you, but everyone is aware of the problem and there has been a massive focus on this next game now.

“Now that we’ve secured our Premiership future we need to make sure we don’t sit back and take our foot off the gas, we have to go all-out for the European Challenge Cup and give ourselves a shot in the Heineken Cup next season.”

Up against a tough Exiles outfit, Morris said: “London Irish are one of the form sides in the country, and the way they play the game makes them difficult for any opponents.

“They give the ball width, and it will be an exciting game for the fans because both teams have a very much attack-minded game plan. We’ve both beaten each other once this season in what were two close games, and with this one as the decider we want to make sure it’s us that comes out on top.”

Last weekend, of course, saw the return to fitness of fly half Jonny Wilkinson after a 40-minute outing which coincided with the improvement in the team’s performance.

“He’s a fantastic player, you don’t need me to tell you that, and it was obvious for everyone watching that he really drove our attack when he came on,” said Morris.

“He can make passes that most players can’t execute, he draws defenders towards him and then frees up space for other people so it’s nice to have him back. Hopefully he can stay fit and it bodes well for the few games we have left this year and the whole of next season if we have him with us on a regular basis.”

Acknowledging the contribution from the Kingston Park terraces last weekend, Morris hailed the Falcons’ fan power, stating: “Sunday was probably the best atmosphere so far this season, and it does definitely lift the players to have such vocal support.

“The players appreciate the backing of the fans up here, and they have their part to play.”

Tickets are still available for Sunday’s game by calling 0871 226 60 60, popping to the stadium during office hours or on match day itself.