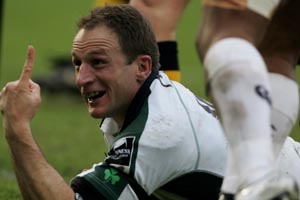 European Challenge Cup finalists, London Irish, have announced that Mike Catt has agreed terms with the club for another year.

The World Cup winner who originally joined the Exiles in 2004 has been in outstanding form this season. He scored his fourth try and kicked his 50th point for the club in last Sunday’s historic victory over London Wasps at the Causeway Stadium. Over the past two seasons Mike (35) has played 44 games for London Irish and has had a major influence on the dramatic progress the club has made.


Commenting on his decision to stay with the Exiles Mike Catt said: “I am enjoying my rugby at Irish. We have started out on a journey as a squad and I want to be part of seeing where it will take us. Helping the club play at the top level in the Guinness Premiership and Heineken Cup will be invaluable experience for me as I position myself for my future in rugby.”