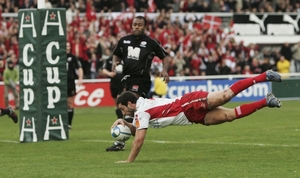 The Argentine centre, who has been in superb form for the French champions this season, striking up an imaginative three-quarter pairing with Phillipe Bidabe, is reportedly considering a move to Perpignan next season

A place in the last eight of Europe’s premier competition awaits Biarritz, after they defeated Saracens 43-13 in France, thanks largely to the creative work of Aramburu.

The inside centre scored the opening try of the contest and then made the second touchdown with a sublime offload to the advancing Jean-Baptiste Gobelet.

Speculation about the the possible move by Aramburu from Biarritz to Perpignan follows talk of Thierry Dusautoir moving to Heineken Cup holders Toulouse.

The move by Aramburu, which has not yet been confirmed, would be for the 2006/7 season and his arrival at the Stade Aime Giral would undoubtedly bolster Perpignan’s chances of European success in the future.