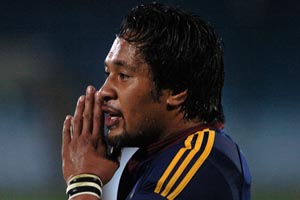 Samoan born centre Seilala Mapusua has signed a three year contract with European Challenge Cup finalists London Irish and will arrive at Sunbury at the end of October. - 29/11/2006 12:19

Samoan born centre Seilala Mapusua has signed a three year contract with European Challenge Cup finalists London Irish and will arrive at Sunbury at the end of October.

Mapusua, the Samoan born centre, who made his debut for the Pacific Islanders XV in 2004 and who currently plays for Otago and the Highlanders in New Zealand, has been signed by London Irish.


Seilala was born in Samoa and grew up in New Zealand where he attended Auckland’s Wesley College, the same school as Jonah Lomu. He was a member of the All Blacks team that won the World Junior Championship in Wales in 1999 and went on to play in the highly successful New Zealand Under 21s.

He has played at centre for the Otago NPC team since 2000 racking up 68 provincial appearances and twelve tries. He has also completed four Super 12/14 seasons with the Highlanders making 37 appearances and scoring 25 points. Seilala will leave Dunedin to join up with the Exiles after the completion of this year’s NPC.

Commenting on his move to London Irish, Seilala Mapusua said: “I’m really excited about playing for London Irish and Manua Samoa. I wanted a fresh challenge and playing at the top level in Europe provides that. I am also looking forward to linking up with my friend Riki Flutey. The management and coaches at the Highlanders have supported my decision to move to England and I am grateful to them for that.”