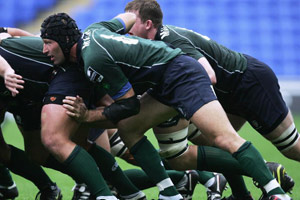 “There is a very high quality of teams participating in the European Challenge Cup,” he said. “I certainly don’t think we can underestimate London Irish as opposition. They have a very full and competitive side with strong players in all positions.

“We know from our trip to Gloucester what the quality of the Guinness Premiership is like and, talking to players there, we know that London Irish are seen as formidable opponents. Let’s face it – any team that can boast players of the quality of Olivier Magne can only be seen as fierce adversaries!”

And although the tournament has not always been the centre of the “Saison Bayonnais,” Doucet is in no doubt that this year’s competition has captured the hearts of the Basque team and supporters alike.

“We have been lucky in terms of injury this season. We are going to be able to field a full-strength squad and we will certainly be looking to continue in this tournament which has now captured our imagination,” he said.

“If I am honest, at the beginning of the season we saw the European Challenge Cup as a secondary priority to the Top 14. There is a lot of pressure on the teams and a very full calendar so we were very concerned about the lack of depth in our squad.

“We initially decided to use the early games as opportunities to rotate the squad and give some of our younger players European experience.

“Having said that, as the tournament progressed we found ourselves getting more and more into it and now we have qualified for the quarter-finals it is a different ball game altogether. We are really proud of what we have achieved and are hungry for more. We are going to London looking for a victory.”