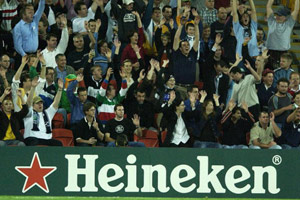 The Heineken Cup is on the way back – and the records just keep on coming thick and fast as the tournament prepares to welcome its 500,000th fan to this season’s competition along with the 6,000,000th supporter through the turnstiles in less than 11 seasons.

The 6,000,000th fan will come first in the Round 5 numbers game, that milestone being reached on the night of Friday, 13 January when the traditionally unlucky date will be extremely lucky for one spectator.

The 7,483rd supporter of the night to go through the turnstiles at either Castres Olympique, Ulster Rugby or Bourgoin will be No 6,000,000 and to celebrate the landmark occasion ERC, the tournament organsiers, will have a special competition involving fans at all 12 Round 5 matches.

One lucky fan from each match will go into a draw to be made at the Leicester Tigers match against Stade Français Paris at Welford Road on the Sunday afternoon with the winner picking up the glittering prize of a VIP weekend for two to the Heineken Cup 2006 final at the Millennium Stadium, Cardiff on Saturday, 20 May.

And the draw to celebrate that 6,000,000th fan will be made in front of the Tigers’ fifth successive European full house of 16,815. The three sell-out crowds this season will take the Tigers’ grand total of fans at Heineken Cup games to 442,064.

Meanwhile, by the end of the fifth weekend of Heineken Cup 2005 / 2006 action over half a million fans will have watched tournament matches this season with the four rounds so far totalling 437,028 spectators.

And Leicester are not the only ones who will pull in bumper crowds.

The first Heineken Cup appearance of the season for fit-again Ireland and British and Irish Lions captain Brian O’Driscoll will be in front of a packed RDS when Leinster take on Glasgow Warriors while All Blacks legend Jonah Lomu has already demonstrated his appeal in Cardiff Blues colours and the Arms Park will be full to the rafters for the key Pool 2 contest with Perpignan.

Elsewhere defending champions Toulouse are playing their clash with 2004 Heineken Cup winners London Wasps at the 37,000 Le Stadium and are expecting a massive turnout while 100 per centers Sale Sharks could virtually book their place in the last eight if they can beat Newport Gwent Dragons in front of another five-figure Edgeley Park crowd.