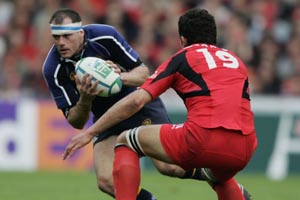 The first ever All-Ireland clash of Leinster and Munster in the Heineken Cup is expected to produce a terrific battle between fiercely competitive sides noted for contrasting styles of rugby.


In preparation for this clash Leinster has named a full strength team for this weekends Celtic match against the Border Reivers at Netherdale on Friday night (KO: 9pm).

Leinster coach, Micheal Cheika believes that there is room for improvement in the Leinster team.

“We’re looking to build more phases to pressurise the opposition. We still gave away too many set pieces (against Toulouse). We got snaffled and that puts you under pressure.

“If I look at how we’re shaping up I’m very happy with where we’re at. It seems as though the guys are enjoying the game and I feel that we’re doing very well together as a group.

“What we do need more of is consistency though. That in itself is a building process.”

Rob Kearney starts on the right wing in one of four changes to the side that won the Heineken Cup quarter-final last weekend. In the pack, Ronan McCormack starts in a strong front row alongside Brian Blaney and Will Green, while Niall Ronan comes into the backrow after a series of impressive displays for the Leinster ‘A’ team recently.

The replacements bench will be confirmed closer to kick off.