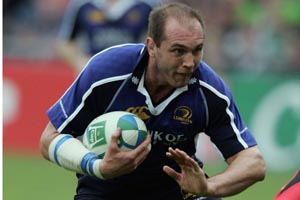 Leinster have named their team for their last test prior to the highly anticipated Heineken Cup semi-final against Munster. - 29/11/2006 12:40

Leinster have named their team for their last test prior to the highly anticipated Heineken Cup semi-final against Munster.

The Leinster team to face the Llanelli Scarlets in Lansdowne Road on Friday (KO: 7.10pm) has been named.


Felipe Contepomi will make his 50th appearance for the province. The Argentinean, who is the Celtic League’s top scorer with 221 points (including seven tries) is partnered by former Llanelli scrum-half Guy Easterby.

Gordon D’Arcy, meanwhile, will line up alongside Brian O’Driscoll – who captains the side – in the only change to the backline that defeated the Border Reivers 35-34 last weekend.

In the pack, Will Green lines up in the front row alongside Reggie Corrigan and Brian Blaney while Cameron Jowitt returns to form an aggressive back row alongside Keith Gleeson and Jamie Heaslip. Supporters can pay at the turnstiles on the day.