Jonah And Blues On Song 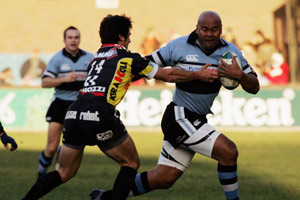 The Blues had won just three from 18 since the start of the 2002 competition but they face Perpignan on Saturday with their quarter-final hopes in their own hands.

“We know it is a vitally important game, there is no denying that,” said 44-times Wales capped Blues captain Rhys Williams. “As a squad we are quietly excited about the prospect of the game – it is going to be a very big occasion.

“The golden rule in the Heineken Cup is to win your home games and that was one of our major goals at the start of the season, but we know Perpignan have class players right throughout their side. We learned that when we met them out there and we know how strong they can be. They certainly won’t be coming to lie down.

“We have been through some lean times in recent years, but we have got a lot of experience in our squad. There are some old heads who have been there and done it at the highest level – Martyn Williams, Rob Sidoli, Gethin Jenkins, Xavier Rush and Jonah Lomu – and their influence will be vital.

“Sometimes the whole occasion can get to you but I don’t think we will fall flat on the day. We all know what we want to achieve, and what we are capable of, and beating Perpignan would be a huge stepping stone for the Blues.

“At the start of the season some people claimed we had been given an easy passage. But it has turned out that ours has been one of the most competitive groups of the lot and we are totally focused on the Perpignan game at the moment – the ball is in our court.

“And while a lot of good things have been said about the Blues in recent weeks – and we have had some good results – we all realise we have not won or achieved anything yet and that we have just had a good month.

“However, the nice thing is that qualifying for the quarter-finals, which was another major target at the starts of the season, is within our grasp and within our control.

“That said, it would also be fair to say that Saturday’s game is the biggest match we have faced since we last reached the Heineken Cup quarter-finals in 2001. It is a huge match for everyone connected with the Blues.

“The Round 2 game in Perpignan wasn’t the best of results for us and we didn’t play at all well, we just could not get our game plan going. They got their tails up early on and the crowd got behind them.

“But we learned a lot from that game and, judging by recent weeks at the Arms Park, we can expect a very big and supportive crowd.

“It is sometimes daunting playing in the cauldron-like atmosphere of French grounds, with bands and trumpets sounding off, but I believe a full house at the Arms Park can more than match that kind of intimidating atmosphere.

“Our home crowds have played a big part in our recent success – it is really special running out in front of them and hearing them urge us on.

“However, it was a tough Christmas and New Year period with 10 of the team playing in all three fixtures and we certainly picked up our fair share of knocks.”