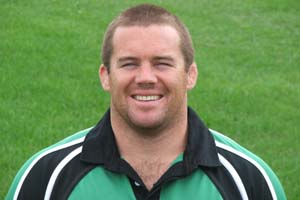 Ireland A international, John Fogarty, who is now in his fourth season with Connacht, will captain Connacht in their tenth European Challenge Cup season.

“It is a huge honour for me. I have really enjoyed my three seasons to date with Connacht and to be asked to captain the side is a great honour. I am really looking forward to it,” said the Buccaneers clubman who played 28 times for Connacht last season.


It has been a memorable year for Fogarty. He received his first Ireland A cap against France earlier this year and went on to star in the Churchill Cup campaign in the United States and Canada.

Born in Cork, Fogarty moved to Tipperary when he was two and is a product of Cashel RFC and Rockwell College.

He won a schoolboys Triple Crown in 1996 and travelled on an unbeaten tour of Australia that season. He was capped at U-21 level and currently has five A Ireland caps.

Fogarty, who also played for Cork Con, was part of the Munster squad which was defeated in the Heineken Cup final against Leicester in 2002. His younger brother Denis won a Heineken Cup medal with Munster this year.