Jauzion set to give champions a lift 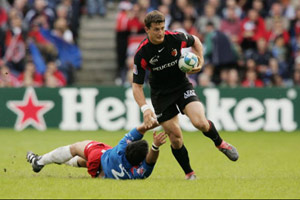 Almost 150,000 fans will be at the four sell-out quarter-finals and those at Le Stadium could see star centre Jauzion back in action after injury kept him out of the 6 Nations.

“I’ve been lucky coming back from injury – I’ve been able to re-integrate well into the team and we have been working well together as a unit,” he said.

“Our game last weekend against Agen was a big test for us. It’s always difficult playing a derby game like that and really poor weather didn’t help. But we got the result we needed and now we can fully focus on the task ahead against Leinster.

“Our preparation for this game will be the same as for any other. We take things slowly and calmly but at the same time we all know how important the match is and how big a performance we are all going to have to put in to get victory over the Irish.

“It’s going to be a really tough game. Leinster have several players who are really hard to defend against – obviously that includes the likes of Brian O’Driscoll and Gordon D’Arcy, but also Felipe Contepomi who has had a fantastic Heineken cup so far and is a really  dangerous player, both with his goal kicking and his in-field play.

“I was obviously disappointed to miss out on the 6 Nations and with the Irish centre pair at Leinster and me and Fritz playing for Toulouse, I suppose it is a bit like France v Ireland in the back line!

“Having said that, although we won the 6 Nations game in Paris, I don’t think that gives us any real advantage. Ireland had an amazing second half, particularly in the back-line.

“If anything, having seen that performance it is more worrying than re-assuring for us to know that so many members of the Irish team from that match will be playing here on Saturday.

“We won’t focus on individual players and try and concentrate on our own game, but we certainly know that, in order to win, our defence has to be completely solid so that’s a big focus for us this week.”