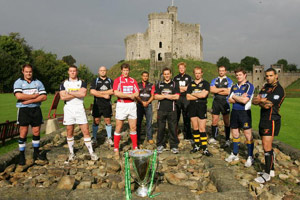 Round 5 victories will give some a foot in the quarter-final door while defeats for others will end dreams of Euro glory for another season.

And although Sale Sharks, along with Bath Rugby, are riding high with four wins from four, Sharks captain Jason Robinson is adamant they will not be taking their foot off the gas in their Sunday lunchtime Edgeley Park clash with Newport Gwent Dragons.

The Sharks have already won one more game this tournament than in their previous two seasons in the competition and the Dragons have nothing but pride to play for, but Robinson dismisses any easy ride.

“We have done well in this season’s Heineken Cup but we have not yet achieved our first target of qualifying for the knock-out stages,” said the former England captain.

“The Dragons may well be out of contention for qualification but they gave Munster an almighty fright the other week at Thomond Park and were leading at one stage. We are taking nothing for granted and know we will have to be at our best to beat them.

“We played well at Rodney Parade back in October, when we won 38-11, and the players know we will need more of the same on Sunday.

“We also have the bonus of knowing how Munster will have fared at Castres on Friday evening – although that will be shut out of our minds at kick-off time.”