It’s crunch time for the Dragons 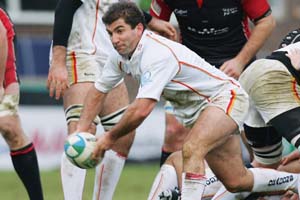 Newport Gwent Dragons have everything to play for as they prepare to face Overmach Rugby Parma in the Heineken Cup play-off match at Rodney Parade, Newport, on Friday night (7.45 pm).

The winner will claim the 24th and last place in the 2006 / 2007 Heineken Cup tournament while the loser will compete in next season’s European Challenge Cup.

Newport Gwent Dragons earned a place in the play-off match as they were the highest finishers from the Irish, Scottish and Welsh teams in the 2005 / 2006 Celtic League who failed to automatically qualify for European club rugby’s premier competition. Overmach Rugby Parma were the highest placed Super 10 team of the unsuccessful Italian semi-finalists.

And Albert Tuipulotu, the Tongan-born centre who has played Test rugby for the USA Eagles and is a key figure in the Parma midfield, warns the Dragons they are in for a mighty forward battle.

“We are getting ready to give everything in our last match of the season and we can definitely match them up front as we have got one of the best packs in Italy – we will take them head on,” he said.

“It is a massive prize at stake as it would be huge for the club to qualify for the Heineken Cup for the first time.

“But, to be honest, I don’t know much about the Dragons, apart from them having a number of international players and that it will be a very big challenge.

“We did well to finish third in the Super 10 and qualify for the semi-finals and now we can look forward to one more big game – we are really looking forward to this match.”