It is going to be some collision – Stevens 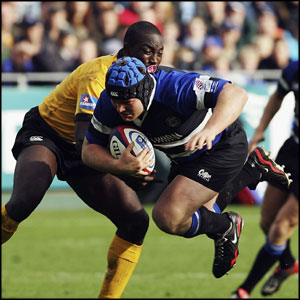 The collision between the Leicester Tigers and Bath Rugby packs in the first of the Heineken Cup quarter-finals on Saturday is going to test the foundations of The Walkers Stadium. - 29/11/2006 12:48

The collision between the Leicester Tigers and Bath Rugby packs in the first of the Heineken Cup quarter-finals on Saturday is going to test the foundations of The Walkers Stadium.

England prop Matt Stevens, who missed last weekend’s dress rehearsal with a shoulder injury, hopes to prove his fitness to pack down against the Tigers eight with an away quarter-final against either Biarritz Olympique or Sale Sharks the prize for the winners of the 158th clash between arch rivals Bath and the Tigers.

“These are exciting times for Bath and the rivalry between the two clubs is steeped in history. It is always a tough and challenging encounter to play Leicester – especially for the packs,” said Stevens.

“The Tigers pack is a very good one but you revel in the challenge of competing against another fine set of forwards.

“And Bath will be playing their hearts out to win at The Walkers Stadium – just as they were last Saturday, despite the 19-12 home defeat – because it would be amazing if we could emulate the side of 1998 and go on and win the Heineken Cup.

“I honestly believe we are one of those clubs who have worked really hard and not reaped the rewards we deserve. We have been in three recent finals – the European Challenge Cup, the Powergen and Premiership final – and come off second best in the lot so it would be marvellous to put the record straight.

“We have been through a lot of near wins and we owe it to ourselves, the amount of work the coaching staff have put in and the fans who support us so loyally week in and week out but we are only at the quarter-final stage not looking forward further than next Saturday.

“One area in which we have improved immensely over the last few weeks is in the back-line. We have always had the players but now we have started to gel as a team as a whole. They are starting to look really explosive and I am looking forward to a dominant performance from them on Saturday.”