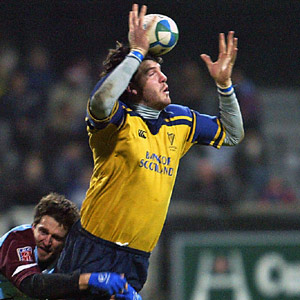 Two momentous Irish and French Heineken Cup quarter-finals will be played on Saturday…and the balance of the pre-match fortunes appears to be titling slightly in favour of the French as they make their final preparations for the big games.

And both Perpignan and Toulouse recorded confidence-boosting victories in the Top 14 last weekend while both Irish provinces were left kicking their heels.

Leinster had a free weekend in the Celtic League programme and Munster’s big-match preparations were knocked off course when their Celtic League game against Llanelli Scarlets was postponed just 45 minutes before kick-off thanks to a waterlogged Stradey Park pitch.

The decision of referee Rob Dickson to abandon the battle means Munster have not had a competitive match for over a month – hardly ideal preparation for a do or die match of such magnitude.

“We just have to start looking at the positives as we build up to Perpignan,” said Munster coach Declan Kidney.

“We’ve trained together after a long break and did everything but play. At least the players won’t end up with any bumps or bruises on Saturday.”

The same cannot be said for their opponents. They will be without key fly-half Nicolas Laharrague who tore shoulder muscles as his side gained a psychologically important 18-15 win over Bourgoin in a bruising match watched by almost 30,000 fans at St Etienne’s home ground Stade Geoffroy-Guichard.

There were slightly fewer supporters for Leinster’s warm-up match against Petrarca Padova on St Patrick’s day, 1500 fans turning up at Donnybrook to see their side win 22-12.

The team came through unscathed, meaning Leinster are virtually at full strength – aside from Christian Warner’s long term knee injury.

Ands they need to have as few injuries concerns as possible as they face triple Heineken Cup champions Toulouse at the intimidating 37,000 capacity Le Stadium.

The hosts comfortably fought off Agen last weekend to run out 19-7 victors and maintain their momentum before this weekend’s match.

Further good news for the French was the try-scoring return of Yannick Jauzion. The man-of-the-match in last season’s Heineken Cup final looked sharp and strong, and his battle against Brain O’Driscoll is keenly anticipated.