Irish close in on final objective 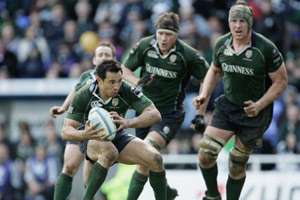 London Irish travels to the north-east this weekend in the next stage of the club's quest for qualification for next season's Heineken Cup... - 29/11/2006 12:16

The Exiles go into Sunday’s European Challenge Cup semi-final with Newcastle Falcons knowing that they are only two games and two wins away from what is a key objective of their season.


“The club’s first European semi-final in four seasons could not be more difficult,” said Brian Smith, London Irish’s Director of Rugby, “Having had a great win over the Premiership leaders last weekend and secured the club’s future in the league, this match will be like a cup final for the Falcons – and it is in their own back yard!  We go into the game as underdogs having lost to them at Madejski Stadium in February.”

“Newcastle is a quality team that has improved steadily over the season,” continued Smith, “Colin Charvis leads a powerful pack that will be very tough up front.  With backs like Jamie Noon and Matt Tait there is constant danger.

“Add in Matt Burke’s handling and kicking skills and the threat Jonny Wilkinson poses either starting or coming off the bench and you get a measure of the tough task we are facing on Sunday afternoon.”

“We are taking our strongest available match squad to Newcastle.  The players have been performing well recently and we have confidence in their ability to concentrate on doing a job in Kingston Park.  It is going to be a good challenge and one that we are looking forward to meeting,” Brian Smith concluded.