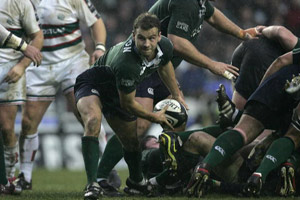 London Irish scrum half Paul Hodgson has vowed his side will play running rugby when they face Gloucester Rugby in the European Challenge Cup final... - 29/11/2006 12:15

This season has seen the Exiles excite crowds across Europe with their brand of try-scoring rugby, and Hodgson says nothing will change this weekend.


And, up against a team he describes as “unpredictable” and “exciting” – this match is set to be a classic.

“We’re going to try and score tries,” he said. “If it’s runnable, we’ll try and run it. We are trying to play rugby that allows you to score tries and we won’t change that against Gloucester,” said Hodgson.

“It’s a style of rugby that has worked well for us this year and we have to remain positive.”

There is understandable disappointment in the Exiles camp following their defeat to Leicester Tigers in the Guinness Premiership semi-final last weekend, and Hodgson knows that he only has one chance of silverware left this season.

“Losing to Leicester was a blow,” he said. “This is our last chance of silverware this year and I will be devastated if we don’t take it.

“This season’s run in Europe has been great, I’ve been involved in every game and it has taught me such a lot.

“We have played a lot of games in France, against Agen, Pau and Bayonne in the quarter-final, and its been invaluable experience – especially for the younger players.

“We have secured Heineken Cup rugby for next season and I think this year will stand us in good stead as we take on some of the biggest teams in the game.

“For now though, we are focusing on the game against Gloucester. We know they are a good side, that they have been playing a lot of rugby, scoring tries and being unpredictable… they are an exciting team.

“I expect a good battle with Peter Richards – I know Peter from my Bristol days – and he is a great runner with the ball in hand.

“We had a good match up in Gloucester, but that was more of a kicking game. Hopefully the weather will be better and more of a running, open game on Sunday.”