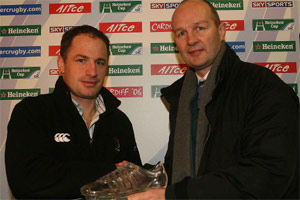 
Humphreys reached the landmark score as he slotted over a penalty in the 51st minute before leaving the field with an injury.

Humphreys adds the crystal boot to the ERC Elite cap he was presented with in Round 4 in recognition of his 50th appearance in the tournament.

He made his Heineken Cup debut in 1996, and scored 23 points when Ulster defeated Caledonia 34-41.