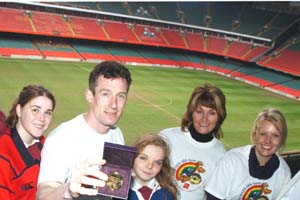 Cardiff ’06 Heineken Cup final ambassador Rob Howley gave the Noah’s Ark Appeal, a huge boost by dropping the first coin into the collection buckets that will be circulating the Millennium Stadium on Saturday, 20 May.

Each year ERC, organisers of the Heineken Cup, choose a charity partner for the annual showpiece final of Europe’s premier club rugby tournament and use the final to support the charity’s fundraising initiatives.

And they are hoping the generosity of the crowd will generate a bumper pay day for the Noah’s Ark Appeal to support vital projects at the Children’s Hospital for Wales.

“The Noah’s Ark Appeal is a great cause and I was delighted to be the first person to put my hand into my pocket to kick-start their collection at the Heineken Cup final,” said former Wales and Lions legend Howley, who won the Heineken Cup with London Wasps two years ago.

“It promises to be a fantastic occasion and I’m sure the fans of both Biarritz and Munster will dig deep to help this year’s charity.”

Welcoming Noah’s Ark to the Cardiff ’06 Heineken Cup final, Derek McGrath, ERC Chief Executive said: “ERC aims to ensure that the annual Heineken Cup Final leaves a positive legacy in each city where the final is held.  We are very pleased that Noah’s Ark will be our partner for the Cardiff 06 final and we hope that this relationship will contribute to their very valuable work with the Children’s Hospital for Wales.”

There will be an army of 50 collectors in and around the Millennium Stadium on the day of the final – kick-off is 3.00pm – and everyone is hoping to raise a substantial five figure sum.

Lyn Jones, MBE, CStJ, Chairman of Trustees at the Noah’s Ark Appeal, said: “We’re thrilled to be the official charity of the Heineken Cup Final for 2006.

“It is wonderful that we will have the opportunity to make a collection that will directly benefit sick children in Wales, in the principality’s most prestigious sporting venue.  It promises to be an exciting match!”

A packed house of more than 73,000 fans will watch French champions Biarritz Olympique and Irish favourites Munster battle it out for the top prize in world club rugby.

The Cardiff ’06 final will be the fourth time the Welsh capital has hosted the tournament’s finale – with the Millennium Stadium holding the tournament record crowd of 74,600 for the 2002 final between Leicester Tigers and Munster.