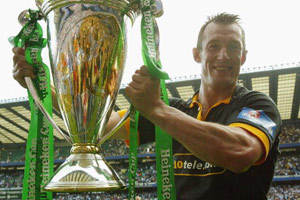 Blues coach Rob Howley says his side need to be mentally strong to defeat Stade Francais Paris in their own backyard - 06/12/2007 16:08

If you’ve got any sense then you will buy your Heineken Cup final ticket today.

Why? Because with one Irish team guaranteed a trip to Cardiff on Saturday, 20 May there simply aren’t going to be enough tickets to go around.

Never mind who wins when the French champions Biarritz Olympique meet Bath in the semi-finals, the fact that either Brian O’Driscoll’s Leinster or Anthony Foley’s Munster will be coming to town is going to mean that this year’s Heineken Cup final tickets will be like gold dust.

And so they should be – just look at the quality of the teams, and the standard of some of the players, who will be taking part.
Bath, Leinster, Munster and Biarritz Olympique are packed with players who can serve up top quality action. They will all have Cardiff on their mind for the rest of the month as they prepare for the Heineken Cup semi-finals on 22/23 April.

After another fantastically dramatic and entertaining weekend of quarter-final action, all bets are off on who will take the title this season.

For those who thought Toulouse were going to make it three wins in four seasons, think again.

And didn’t Bath prove you can take nothing for granted in this great tournament by sticking in out against their age old rivals Leicester Tigers. I still have to pinch myself every time I read the score from that game at The Walkers to make sure I’m not dreaming.

Munster’s quest for the holy grail of world club rugby continues after a typically gritty performance against Perpignan and only Biarritz are left from the mighty French championship.

Who said Celtic League rugby wasn’t anything to write home about? There are two Celtic clubs, one English Premiership outfit and one French team left in the race for European rugby’s top prize and the Celtic League flag is guaranteed to be flying high and proud at the Millennium Stadium on Saturday, 20 May.

The great battle of the English Premiership sides, Leicester and Bath, turned out to be a bit of a damp squib. There was tension and dram in the closing 10 minutes, but not much quality.

Both teams knew too much about each other and there was little or not attacking intent. If only the Tigers had had Felipe Contepomi at outside half.

The Argentinean was brilliant for Leinster in their amazing victory over the reigning champions Toulouse. He prodded and probed, kicked and cajoled and proved he is one of the best outside halves in the business.

If Leinster can play like that again then anything is possible for them this season. Their attacking flair more than matched the much heralded Toulouse and they were sound as a pound up front.

If Contepomi can join Brian O’Driscoll, Gordon D’Arcy and Denis Hickie in Cardiff at the end of next month then the fans are going to be in for a real treat.

Yet even though Leinster produced one of the greatest performances in the history of the Heineken Cup, and notched one of the greatest upsets, they have still got to do it all again in the semi-finals. Their match-up with Munster will divide the Irish nation, yet set rugby lovers around the world tingling with excitment and anticipation.

I just hope fate doesn’t conspire to serve up another Leicester v Bath style game because both sides know each other so well. Somehow I doubt it.

It will be swashbuckling Leinster against a Munster side that has defied the odds over the past 18 months to return to the top of the European tree to stay on course for what many people feel is a predestined victory in the Heineken Cup final.

Having twice been beaten in the final will it be third time lucky? Nobody would deny them their moment of glory, but they will know they will have to be at their very, very best against Leinster to even earn a trip to Cardiff next month.

As for Biarritz, the stage on which they had to play against Sale Sharks was quite magnificent. Sale found themselves playing the whole of the Basque nation, not merely the French champions.

It was another epic Heineken Cup occasion and if Biarritz can get past Bath then Cardiff will be full of colour next month.