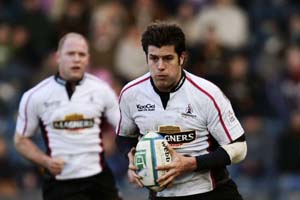 Former Wales caretaker coach Lynn Howells is back in the big time after signing as coach to Heineken Cup side Edinburgh Gunners. - 29/11/2006 12:01

Former Wales caretaker coach Lynn Howells is back in the big time after signing as coach to Heineken Cup side Edinburgh Gunners.

Howlles, who led Wales on their two test tour of Japan in 2001, takes over from Todd Blackadder as the head coach at Scotland’s leading team and returns to the UK after two seasons in italy with Leonessa.


A native of the Rhondda Valley, Lynn Howells played for Tylorstown and Penygraig, and spent a season with Pontypridd in 1971. He returned to the club as assistant coach to Dennis John in 1991, guiding Ponty to the Swalec Cup in 1995/6 and the Premiership League title the following season.

From 1998-2001 he was Head Coach at Cardiff, during which time they were Premiership League champions and reached the Heineken Cup quarter-finals. He returned to Pontypridd in 2001 as Head Coach, when they won the Principality Cup and were runners-up in the European Shield. In 2003, he moved to Celtic Warriors as Director of Rugby. They finished third in the league that season and also competed in the Heineken Cup. Despite a successful season, rationalisation of the Welsh sides meant that Celtic Warriors were disbanded. Lynn then moved to Leonessa in Italy as Director of Rugby where he has been working until now.

At international level, Lynn moved up the ranks, coaching the Wales U21 and A teams before becoming Assistant Coach of the senior Welsh national squad between 1998 and 2001. He was Head Coach for the Wales tour of Japan in the summer of 2001.

Speaking on his appointment, Lynn Howells said: “”Edinburgh has a very talented squad of players and I am extremely excited about the prospect of working with them. My focus will now be on building a consistent level of performance on the field and I very much look forward to the challenge ahead of us in both the Magners League and Heineken Cup.”

The Edinburgh Gunners team for their Magners League match against Leinster at Murrayfield on Friday 8 September at 7.30pm is as follows: